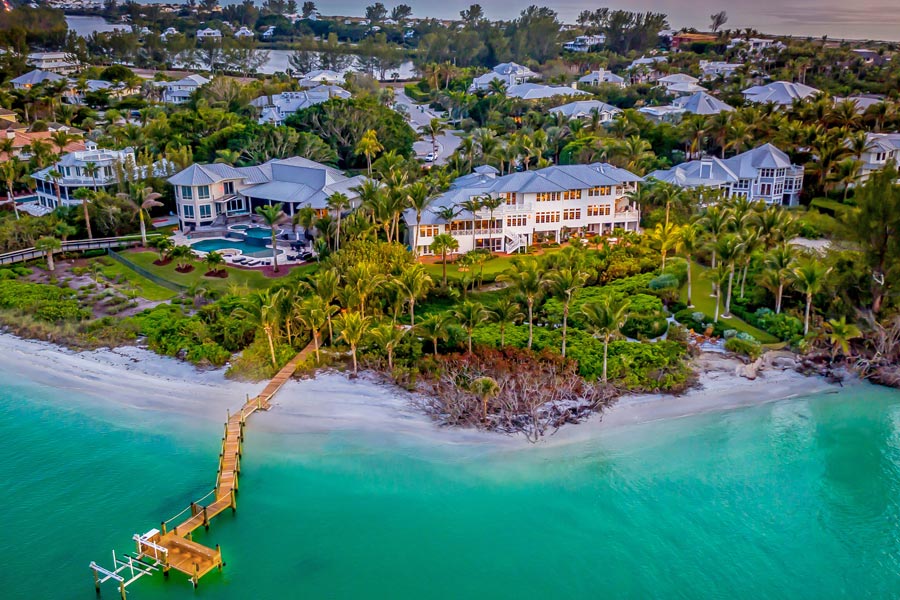 The Florida Gulf Coast property, once listed in luxury estate auction for $13.5 million, is being auctioned with no reserve price on January 10, 2019.

Situated on an idyllic waterfront parcel along Florida’s Little Gasparilla Pass, a Boca Grande retreat is up for luxury auction without reserve on January 10, 2019.

It was on the luxury home auction market starting in February 2018 for $13.5 million, before getting a price cut in August to $10.9 million.

Beyond the circular drive and port-cochère, the luxury estate is the kind of show space designed for entertaining. Built in 2006, the 10,500-square-foot, seven-bedroom, six-bathroom, and three half-bathroom estate features large living spaces and an open flow.

It’s “not just another ‘big house on the water,’” said David Enriquez, vice president of operations for Platinum Luxury Auctions. “It has immaculate finishes that make it quite evident that no expense was spared in its construction,” he said. “Each of the seven en-suite bedrooms has access to a terrace with views of the water or the resort-style pool.”

A 10-minute drive from the center of town and the exclusive Coral Creek Club, this luxury real estate is situated in Boca Grande, a small residential village in Florida’s Gulf Coast.

Once a fishing village for the wealthy, the area was home to The Gasparilla Inn, which hosted some of the nation’s most influential tycoons, including J.P. Morgan, Henry DuPont, and Henry Ford in the early 1900s. Today, the island is still a lure for the rich and famous. Audrey Hepburn had a home here, and the Bush family still stays seasonally, according to details published on Platinum auction’s web site.

Mr. Enriquez described the owners as “previously involved in for-profit education. While they love the home,” he says, “they’ve relocated to California.”

There’s a formal dining room with a wall of windows overlooking the water, a state-of-the-art gourmet kitchen, and a family room that showcases a drop-down projector and movie screen concealed in ceiling soffits. Five en-suite guest bedrooms round out this floor. Upstairs, dual master suites each include his-and-hers offices, which open to private terraces with views of the water. An elevator provides access to all three levels.

Set on one-and-a-half manicured acres and 264 feet of water frontage, the property affords an outdoor oasis with over 3,560 square feet of terraces and balconies from which to enjoy the scenery.

A reclaimed brick walkway with a bougainvillea-covered pergola leads to the front courtyard and resort-style pool area.

“One of the most unique features is the exquisite pool, which has mosaic tiling, a small Koi pond, and a cascading water wall that is actually comprised of artifacts from the 1893 Chicago World’s Fair.”

On the waterside, dense vegetation leads to the newly constructed dock, which is in fact the last permitted dock before entering the Gulf of Mexico, according to Platinum Luxury Auctions.