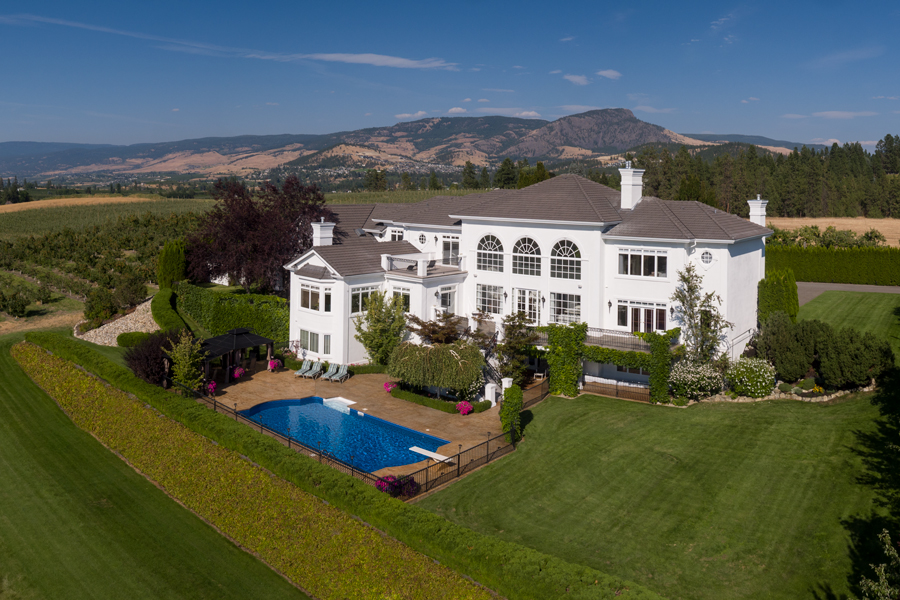 KELOWNA, British Columbia, Oct. 10, 2017 /CNW/ — Seven registered bidders gathered on the site of a luxury home in Kelowna, British Columbia on the evening of October 5th in order to vie for the chance to become its new owner. Following a brief charity auction to warm up the bidding audience – which happened to raise more than C$20,000 for the Kelowna General Hospital Foundation – the 14-acre, lake view estate was sold for approximately C$3.3 million. Although the home was listed at a promotional price of C$6.5 million as part of the auction’s marketing program, the property actually had an extensive listing history of more than 15 years, being placed on-and-off the market since 2001. The final listing price during that period expired at C$3.995 million.

U.S.-based Platinum Luxury Auctions and Kelowna-based The Garage Sale Luxury Auction House, two auction firms specializing in the non-distressed sale of multimillion-dollar homes on behalf of their private owners, joined forces to market the property for auction in cooperation with listing agent Jane Hoffman of the Jane Hoffman Group, a market-leading sales team with Coldwell Banker Horizon Realty in Kelowna.

The picturesque, three-story residence sits upon 14.5 acres, and offers more than 10,000 sf of living area, with 5 bedrooms, 5 full and one half bath. Prominent features of the property include a grand salon with soaring, 22-ft ceilings, a large terrace overlooking a salt-water pool, gourmet kitchen with professional-grade appliances, wine cellar, gentleman’s study and a billiards room finished in Honduran mahogany. The property’s acreage includes orchards currently planted for Gala apples, but is also suitable for wine grapes and cherries.

The auction firms credited their success to the exceptional degree of buyer interest resulting from their marketing efforts. “In approximately 5 weeks of marketing, our team generated 198 buyer inquiries, 102 on-site showings, and more than 33,330 international pageviews to the property’s dedicated page on the Platinum site,” stated David Enriquez, Platinum’s vice president of operations. In fact, the level of interest was such that it set several records for The Garage Sale. “Some of our buyer-response metrics were off the charts for this transaction,” noted Alex Lambert, CEO and founder of The Garage Sale. “We experienced record numbers for opens and click-throughs on our newsletters, for total video views, and for overall engagement with our social media posts.”

According to statistics taken from the area’s Multiple Listing Service, the luxury auction® sale was one of only 5 sales above $3 millionfor a non-waterfront home in Kelowna within the past 4 years. Interestingly, 2 of those 5 sales were achieved at auction. “What is intriguing is how our model – which produces a date-certain sale within approximately 2 months – is such a great fit for this market,” added Jesse Ross, the lead auction project manager for the sale. “The data shows that the average time-on-market for non-waterfront Kelowna homes that sold above $3 million within the past 10 years is 1,079 days.”

“The alliance of our firms has produced results that we’re excited to share with the rest of the Canadian market, and to hopefully deliver to future luxury property sellers in those areas,” said Trayor Lesnock, founder and president of Platinum. Lesnock added that the two auction firms have entered into a strategic alliance with the goal of expanding operations throughout Canada’s luxury property markets.

The auction firms declined to offer specific details on the identity of the buyer, noting only that it is a very prominent businessman. The non-contingent sale is scheduled to close within 30 days. Additional information is available at KelownaLuxuryAuction.com, or by contacting a member of the Platinum team at 800.262.5132.