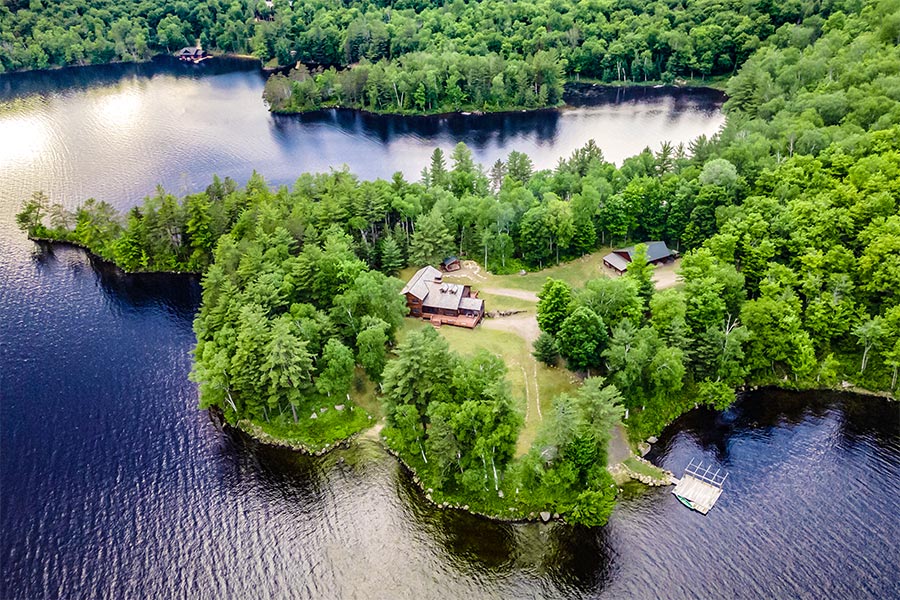 With the successful conclusion of its live, no-reserve auction on July 16th for the Paradise Peninsula camp on Big Tupper Lake, luxury real estate auction house Platinum Luxury Auctions has now registered four consecutive sales in upstate New York’s Adirondacks region. The area – known for its natural beauty and its collection of recreational lakes such as Lake Placid and Saranac Lake – is also home to many, multimillion-dollar lakefront estates and compounds (or “camps,” per the nomenclature in the region).

Working in cooperation with broker of record Adirondack Premier Properties and listing agent Jodi Gunther, Platinum produced six bidders who registered for the sale, four of whom attended the auction in person while two participated remotely and in real-time via telephone.

Prior to the luxury auction, Paradise Peninsula had been on the market for nearly 3 years, enjoying only 2 showings and failing to generate any offers. The Franklin County lakefront property entered the market at a price of $3.2 million and was then reduced to $2.85 million, still with no viable suitors.

“Jodi and her team actually did a terrific job giving the property ample market exposure prior to luxury auction process,” said Trayor Lesnock, Platinum’s Founder and President. “We simply needed to add the proper sense of urgency and date-certainty to their existing formula.”

Lesnock added that Mrs. Gunther also represented 2 bidders in the auction, which he called “an exceptionally rare feat.”

While the sales price will not be released until the transaction has closed (scheduled for the week of August 16, according to the auction’s terms of sale), the auction firm reported that the sale landed within the predicted range. “The sales price landed right at the high end of the price range that was estimated 24 hours prior to the sale,” added David Ashcroft, Platinum’s Managing Director. He also noted the buyer was a New Yorker who plans to build a larger home on the property for his family.

Paradise Peninsula was affectionately given its name due to the peninsular shape that comprises much of the property’s waterfrontage – a whopping 4,000 feet on the lake. Its 14 above-grade acres (not including another 23 acres of submerged area) also includes two small, “private islands” located within a short swim of the shoreline. Expansive lake vistas are afforded throughout the property’s grounds, which also feature gently winding paths complete with various lookout clearings and firepit stations.

The camp’s living structures include a main residence with 5 beds and 3 baths in addition to a large basement and garage perfect for a workshop or “man cave.” There is also a 2-bed guest cabin and 3-bay garage.

In addition to this most recent sale, Platinum sold two lakefront camps on nearby Upper Saranac Lake – one each in 2019 and 2020 – in addition to a camp on Upper St. Regis Lake, also in 2020. The luxury auction firm will hope to increase its number of consecutive sales in the Adirondacks market area to 5 with its upcoming auction of Camp Limberlost this afternoon, August 14. Once asking $10.2 million, the 14-acre property on Upper St. Regis Lake will also be sold without reserve. More details are available at NewYorkLuxuryAuction.com, or by contacting Platinum’s offices at 800.262.5132.